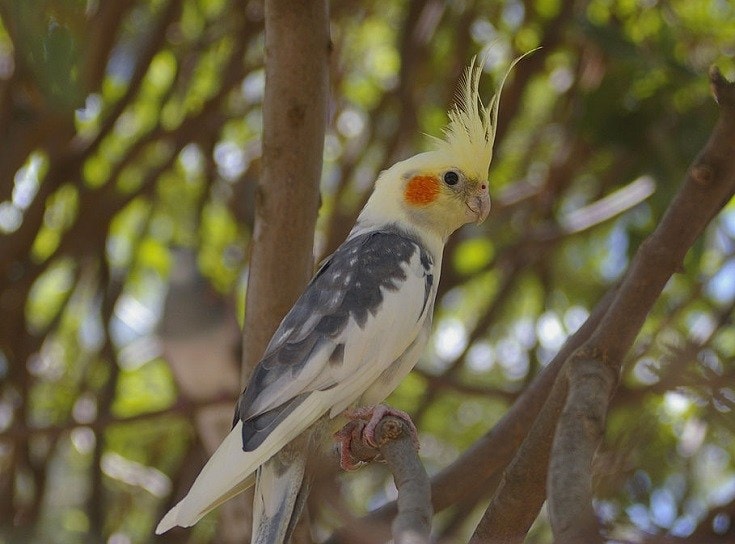 These birds come in a variety of colors and patterns, but pied cockatiels are some of the most popular and easily available of these birds. Moreover, the pied variation was the first established cockatiel mutation, so they’ve had time to become established and grow in popularity.

Cockatiels are native to Australia. They’re considered the fastest fliers on the island, though they don’t have the necessary wing strength to make it to Tasmania, like other birds from Australia are able to.

The pied variation is a mutation of a standard grey cockatiel. It’s the very first cockatiel variation, and it was first created in San Diego, California. They were created by Mr. D. Putman in 1951 and are one of the most common and popular cockatiel variations today. Following Putman’s death, the breeding program was continued by Mr. Hubbell. Meanwhile, a Mrs. R. Kersh was also busy at work breeding another strain of pied cockatiels.

There are many good reasons why cockatiels are so popular. These little birds are full of affection and love. Many like to be held and petted, so long as you’re gentle. However, most are averse to cuddling. They’re happy just to be with you.

But you will want to handle your cockatiel often. If you don’t handle them enough to tame them, then they can display bad behaviors like nipping. Just make sure that you never scold your bird to correct the negative behaviors. This can cause them to shut off from you and become shy. Instead, use positive reinforcement to establish positive behaviors in place of the negative ones.

But these little birds are also brimming with personality. They can sing and whistle and aren’t shy about sharing their feelings. Moreover, they’re highly intelligent birds that can even be taught tricks. They love a good challenge to keep them occupied.

Cockatiels are pretty proficient at mimicking your sounds. They can even “talk” a few words, but it’s really just mimicking things they’ve heard you say. But you’ll almost certainly hear your cockatiel whistling and singing.

While females are adept at mimicking your sounds, males are often better at it. Still, both sexes are likely to repeat just about any sound from around your house, including words, phones ringing, and even things they heard on TV!

These birds can come in any color that you’ll find solid cockatiels in. But Pieds display a range of these colors in seemingly random patterns of blotches, splotches, and patches. For instance, grey-colored pied cockatiels might be grey with white patches. On the other hand, a cinnamon pied would display a range of yellows and cinnamons.

Cockatiels with a single pied gene often have yellow or white feathers in a few random locations, like a toenail or a few wing feathers. Birds with two of the pied gene can display much larger and more numerous color patches.

The most desirable pied cockatiels have symmetrical patterning that matches from the left to the right side of the bird. This is incredibly rare though since you can’t predict it when breeding.

There are three main variations of pied cockatiels:

Caring for the Pied Cockatiel

One reason that cockatiels are such popular pets is that they’re much easier to care for than most parrots. They’re very hardy birds that aren’t susceptible to many health problems and they don’t require much in the way of special care.

You can certainly keep two cockatiels together. However, if you do, they’re less likely to bond with you as closely. It’s also less probable that they’ll mimic your words and other sounds if they have a partner.

Alternatively, you can keep a single cockatiel. They won’t experience any adverse effects, so long as you provide daily attention for your bird. And they require quite a bit of attention. Failure to do so could mean a bird that’s displaying self-harming behavior. If you can’t provide ample attention for your cockatiel, then you’d be better off getting it a partner to keep it company and prevent it from getting lonely.

Be aware that cockatiels poop once every 10-20 minutes. You should expect to spend quite a bit of time cleaning up after them. They also need regular bathing to keep them clean and prevent any illnesses.

These are generally active and playful birds. As such, they need quite a bit of space. You’ll need a cage that’s at least 2 feet tall and about the same in width and length. Make sure the spacing on the bars is less than ¾ of an inch wide to prevent escape.

For the most part, cockatiels are considered healthy and hardy birds. However, they are susceptible to several avian health concerns. While none of these are guaranteed, they’re common enough for you to want to keep an eye out for them.

Some of the most common health problems affecting pied cockatiels include:

Cockatiels can eat a diverse diet consisting of fruits, seeds, nuts, vegetables, and pellets. Pellets are one of the easiest food sources for keeping your cockatiel healthy since they already contain all of the nutrition that your bird needs.

Seeds are great food for cockatiels as well. However, because they’re high in fat, you’ll have to limit them to no more than 30% of your bird’s total intake.

You can also feed your cockatiel a wide variety of different fruits and vegetables, including:

As with any bird, it’s good for a cockatiel to be able to stretch its wings. They can be kept in the cage most of the time, so long as it’s large enough for them to fly in. Even still, it’s best to give your cockatiel an hour or more of time outside the cage each day.

To prevent boredom and keep your cockatiel in good health, it’s also a good idea to provide many toys. Playing with them will provide exercise and mental stimulation. You can keep many toys in their cage, but make sure there’s still plenty of room for them to get around.

Where to Adopt or Buy a Pied Cockatiel

Because pied cockatiels are one of the most popular and common of all cockatiel morphs, you won’t have a hard time finding one. You can usually find a good selection of pied cockatiels at most pet stores. This even includes large chain stores, though you’re likely to find a better selection at a pet store that specializes in exotic pets. There are even pet stores that work specifically with parrots or other birds, and these are a great place to find your pied cockatiel.

You should expect to spend about $150-$250 on your pied cockatiel. The price can vary, depending on where you purchase your bird and how unique their coloration and patterning are.

If you’re looking for a colorful and friendly bird that’s full of personality, you’ll find it in the pied cockatiel. Coming in a wide range of colors and patterns, these birds are each as unique as their personalities. They can mimic your sounds and even your words and they’ll gladly accept your affection. They’re some of the most popular winged-pets of all, and if you own one, you’ll quickly see why.