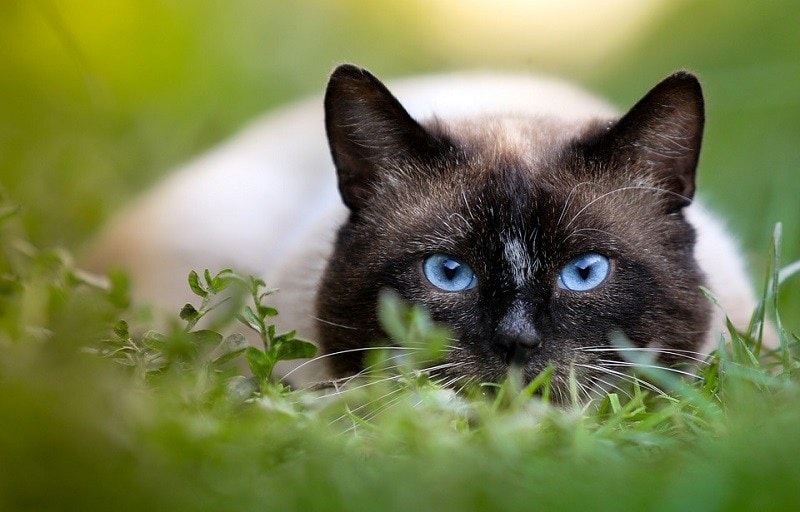 Cats are fascinating creatures, and it seems like there is always more to learn about these mysterious animals. The domestic cat has an amazing history, descending from the African Wildcat into the domestic cat that we know and love today. Still, there is an element of wildness that is still within even the most loving and friendly cat breeds, and this is a large part of what draws us to these furry felines. Other cat breeds, like Maine Coons, Abyssinians, and Savannahs are stark reminders of the domestic cat’s wild heritage.

For cat lovers, there is always more to learn, and there’s no better way to spend a rainy afternoon than cuddled on the sofa with your feline friend, watching a documentary focused on your favorite domestic pet. In this article, we’ll look at 10 of our favorite feline documentaries and where to watch them.

This bizarre and humorous documentary goes in-depth on many different aspects of felines, from anatomy, training, and culture to origins and history. The documentary has been polarizing among viewers — it seems that you’ll either love it or hate it — but there is most definitely something for everyone. The film is hilarious in places, frightening in others, and overall, a unique and refreshing look at the role of felines in modern life.

This documentary goes behind the curtain of the stereotypical, often ridiculed “cat lady.” The film follows four women whose lives are inextricably linked to cats and is both enlightening at times and sad in others. The film offers a fascinating look at the deep love and connection that owners have with their cats. There is certainly a “cat lady” in all of us!

“Kedi” is a fascinating documentary that follows the story of thousands of stray cats living on the streets of Istanbul. These cats wander freely in and out of the lives of the city’s residents, with no real ownership and being between domestic and wild. While the focus of the movie is on the cats, the real story is one of community and the value and joy that these cats bring into the lives of the people in the city. It is a truly fascinating and engrossing story, and the kindness and acceptance of the locals make for a heartwarming experience.

4. The Lion in your Living Room

This unique documentary sheds new light on how your feline sees and interacts with the world. The film looks at the history, biology, and evolution of cats, why they behave in certain ways, and how they have developed such a tight bond with humans over the last few centuries. If you want to know more about what makes your cat tick, this is an informative film that goes deep into how modern cats became what they are today.

5. The Private Life of a Cat

“The Private Life of a Cat” is an old classic and a must-watch for cat lovers. It is a short, 22-minute black-and-white film made in 1947 that is entirely silent and shot from a “cat’s eye view.” The film follows a male and female cat as they court each other and the eventual birth of their kittens. The film then follows the maturation of the kittens and ends where it began! It’s a unique and arresting documentary, and we love the black-and-white, “cats-eye-view” filmmaking.

6. The Science of Cats

This documentary from National Geographic is a fascinating look at how your favorite feline has become one of the most popular pets on the planet. The film looks at the long history of domesticated cats and how humans and cats got to become such close companions. The film opens with the premise that cats are the only animals to domesticate themselves and then explains why. It’s a fascinating deep dive into human’s relationship with felines.

7. The Secret Life of Cats

This engaging short documentary follows the incredible story of a newborn kitten as they grow into a full-grown cat and how they learn survival along the way. The documentary answers some of the biggest questions that owners have about their cats, like why they bring us rats, why they have less expressive faces than dogs, whether they can recognize our emotions (they can!), and training. It’s an informative look at all the biggest questions that cat owners would love answered.

8. The Story of Cats

This two-part documentary from PBS follows the story of how wild cats became the cuddly felines we know and love today. Part One shows how the first cats arose in Southeast Asia and evolved in adjustment to their environments and eventually into tree-climbing solitary species like Leopards and how Lions figured out that they could dominate hunting grounds if they worked together. Part two traces how cats first came to North America millions of years ago and evolved into the treasured rat-catching felines that humans began to domesticate. It’s a fascinating look into the long history of cats of all kinds.

9. The Wonderful World of Cats

“The Wonderful World of Cats” is an incredible film that examines the popularity of domesticated cats and how big cats in the wild became the small, furry, cuddly companions that we love so much today. It takes a deep look at the social influence of cats on culture and both the human and natural causes that made up the path of the evolution of the domestic cat. It’s a fascinating watch, and it is free from the creators who produced it!