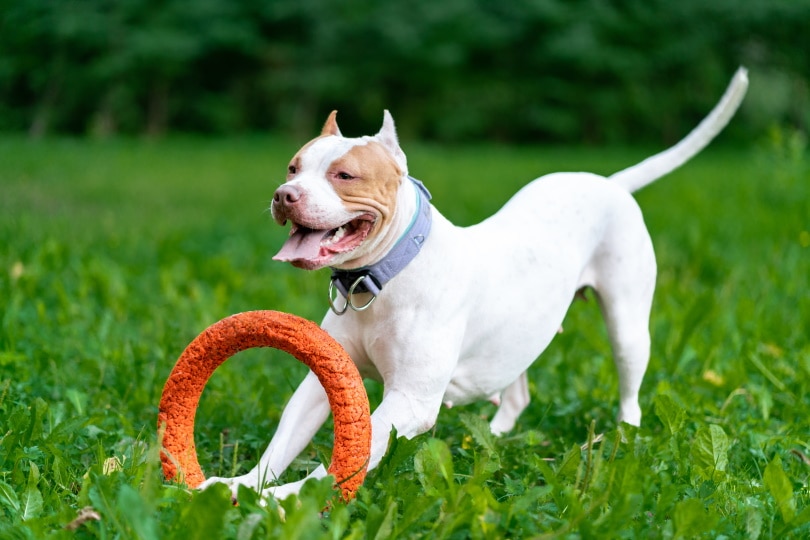 It’s imperative to begin our discussion of good Pit Bull statistics by defining what type of dog it is. The word describes a kind of canine instead of a particular breed. Keep that fact in mind when reviewing the following information. It will likely play a significant role in determining the truth about Pit Bull statistics. They could be a collection of breeds rather than just one particular kind. Pit Bulls include:

1. Two Pit Bull-type breeds are in the top 10 list of the AKC’s most popular pets.

According to the American Kennel Club (AKC), many of these same breeds are some of the most popular ones, despite the Pit Bull’s notorious reputation. The top 10 include two of them, the French Bulldog and Bulldog.

2. A Pit Bull’s upbringing is a better assessment of its temperament than its genes.

The first months are critical periods in a pit bull’s—or any pet’s—young life. A study published in Scientific Reports found that puppies raised in an environment with an active social life are less likely to be fearful as adults. If you want your Pit Bull to have good canine manners, you have to start your pet off at an early age, preferably as soon as you bring it home!

3. Pit Bull-type dogs were war heroes during WWI and WWII.

Many pups served during the war. The most famous of the Pit Bulls was a dog nicknamed Stubby. This pooch wandered into Yale University, where the troops were preparing to deploy overseas. Private Conroy smuggled him to France. Stubby protected the soldiers and even saved the lives of all by locating a German spy. The pup was even decorated by the US Army for its heroism.

4. Pit Bull breeds are not more likely to be mean than other dogs.

The breed is immaterial as far as dog bites are concerned. That’s why the American Veterinary Medical Association (AVMA) has taken a position against breed-specific legislation targeting Pit Bulls, among other breeds. Of course, these injuries and sometimes fatalities are serious matters. However, banning one type of dog isn’t going to solve the problem.

5. There are about 14 million Pit Bull-type dogs in the United States.

Based on the popularity of the various Pit Bull-type dogs, PitbullInfo.org considered how many Pit Bulls are in the US and estimated that they make up about 20% of American canines. The American Pet Products Association (APPA) puts the total number at 69 million. That would mean nearly 14% of our dogs are Pit Bulls.

6. Given Their Poor Reuptation, Pit Bulls suffer from an identity crisis.

As we’ve discussed earlier, defining the Pit Bull is a confusing matter. It’s not a breed but an appearance that makes someone call a dog this type. However, it’s even more complicated when you consider that the public’s perception of what of a Pit Bull is also off the mark, based on data from a study conducted in the UK. Nevertheless, this confusion is one reason why the CDC hasn’t tracked this info since 1998.

7. Pit Bulls aren’t guiltless when it comes their aggressive stereotype.

It’s essential to look at both sides of this issue because of the misinformation over Pit Bull aggression statistics. Of the 433 Americans killed by dogs between 2005 and 2017, Pit Bulls were implicated in nearly two-thirds of all cases. Moreover, non-fatal attacks involving Pit Bulls were significantly more likely to require orthopedic care.

8. Studies show that other dogs breeds are more likely to bite than Pit Bulls.

According to the AVMA, German Shepherd Dogs and mixed breeds were responsible for more injuries when you look at Pit Bull attacks statistics vs. other breeds. The same study also found that small dogs, such as the Shih Tsu and Lhasa Apso, were more to bite. Further research identified mongrels as the primary culprit in bite injuries.

9. Intact male Pit Bulls are more likely to be aggressive.

We understand that the decision to spay or neuter your pet is between you and your veterinarian. Nonetheless, intact male Pit Bulls pose more of a potential threat than altered dogs. It’s worth noting that that the same elevated risk applies to intact females, too.

10. Pit Bull-types have a checkered past.

It’s an unfortunate fact that many Pit Bull-type dogs had a deplorable past of unspeakable cruelty. The name bull refers to the horrific spectacle of bull-baitings for which people used these animals. Pit refers to where these illicit activities took place. That led individuals to selectively breed these dogs for competition in the ring. Luckily, England ended this practice in 1835.

It’s no wonder that getting adopted is so hard for Pit Bulls, given that nearly one-quarter of individuals don’t like the breed and only 50% like Pit Bulls.

As you may expect, the Pit Bull has lived with this negative stigma like a scarlet letter. That may explain why over 50% don’t have permanent homes. Sadly, the numbers are increasing. Research has shown that these pups send three times longer in shelters than non-Pit-Bull-type pets. Inevitably, we must ask, how many Pit Bulls are euthanized each year?

The most tragic aspect of these sobering facts is that it doesn’t have to happen. Dogs bite because they’re either afraid, stressed, or threatened. As we mentioned earlier, how pets are raised and socialized affects their reactions to new things in their worlds.

14. No dog breed has been more abused than Pit Bulls.

One of the more disturbing Pit Bull abuse statistics comes from one study that found that Pit Bulls were overrepresented in the cases of abuse than any other breed, based on necropsies or post-mortem death examinations in 40% of the time. Former Atlanta Falcons quarterback Michael Vick brought this matter to the center stage with his 2007 conviction for his dogfighting operation involving 51 Pit Bulls.

The abuse is too atrocious to detail. Unfortunately, it’s something that many unlucky pups have experienced in many different situations.

15. Human error is the primary reason behind dog attacks.

Researchers investigated the role that people play in dog bite incidences based on police data. They found that the overwhelming factor was human error, regardless of whether the animal was a pet or a feral dog. These findings suggest that these cases are often preventable.

Enthusiasts will tell you that the media has given Pit Bulls a raw deal. Yes, they are loyal pets that will defend their families. However, breeds, such as the Bulldog, are easygoing and affectionate canines. You can say the same about the American Staffordshire Terrier, which is a playful pup that is intelligent to boot. As we’ve said earlier, it’s all about upbringing.

Puppies go through two fear impact periods, one at 8–12 weeks and another at 7–14 months. Bad experiences during these times persist into adulthood. It’s also a factor in puppies taken from their mothers and littermates before 8 weeks old. That may explain why some Pit Bulls end up in shelters because of the behavioral issues that can often occur in these animals.

It’s a prevailing myth that Pit Bulls are more tolerant of pain. Perhaps, their history as fighters makes people think they are more tenacious physically. The truth is that all animals—including humans—feel pain. Unfortunately, dogfighting has perpetuated this notion to the detriment of the Pit Bulls and other so-called tough-guy breeds.

Why Are There So Many Pit Bull Attacks and Fatalities?

Yes, some stats paint a bleak picture of Pit Bulls. However, there are several things to bear in mind when considering the impact of these figures. We’ve touched on the fact that people often misidentify these pups. That can surely skew the numbers. You must also remember that mongrels, i.e., mutts, may have non-Pit-Bull-types a part of the mix with the Pit Bulls taking the brunt of the blame.

We also have to consider the Pit Bull’s reputation and how it affects dog ownership. Its dogfighting history often goes hand in hand with the individuals who choose these pups for pets. One study found a correlation between aggressive dogs and criminal behavior in the people who own these pets. It acts as a self-fulfilling prophesy that some animals end up as bad actors.

How Can I Prevent Dog Bites?

Remember that dogs have the same emotions of anger, fear, and distress as a 2-year-old child. Any parent can relate to the volatility of their feelings. The same applies to a Pit Bull or any other pup. The primary rule is to supervise your child’s time with a dog, even a family pet. A dog may bite if it’s stepped on accidentally or mishandled.

Dogs have varying degrees of patience, especially if they’re tired, sick, or hungry. Canines will act instinctively to pain or distress. That’s why it’s imperative to teach children to respect a pet’s space, toys, and food bowl. The key is to pay attention. Your pup will most likely give a warning by growling before acting out on its emotions.

It’s unavoidable that Pit Bulls would end up at the top of the list with injuries and fatalities. It’s unconscionable that it persists. Anyone who has met a properly raised dog will tell you that it’s all about upbringing. Even Vick’s Pit Bulls overcame the abject cruelty inflicted on them, thanks to the kindheartedness and passion of individuals who saw beyond these dogs’ troubled past.

Remember that pet ownership isn’t a right. It’s a responsibility, no matter if you have a Pit Bull or a Cavalier King Charles Spaniel. Our round-up of stats shows vividly that these dogs are worth the love and attention they deserve. They will undoubtedly repay any pet owner with undying love and affection.

Chris has written on a variety of topics since 2009. Her motto with all of her writing is “science-based writing nurtured by education and critical thinking.” She specializes in science topics, with a special love for health and environmental topics, and of course, pets of all shapes and sizes.

Chris lives happily with her hubby and three cats in the land of 10,000 lakes, writing, wining, and boating as much as she can. She and her husband, Norm, were awarded the State of Kentucky Colonel Honor for their restoration work at Mammoth Cave National Park. Chris’s current passion is wine. She has her WSET 1 and 2 certifications and is currently pursuing her Certified Wine Specialist Award (CSW).

Chris has written on a variety of topics since 2009. Her motto with all of her writing is “science-based writing nurtured by education and critical thinking.” She specializes in science topics, with a special love for health and environmental topics, and of course, pets of all shapes and sizes. Chris lives happily with her hubby and three cats in the land of 10,000 lakes, writing, wining, and boating as much as she can. She and her husband, Norm, were awarded the State of Kentucky Colonel Honor for their restoration work at Mammoth Cave National Park. Chris’s current passion is wine. She has her WSET 1 and 2 certifications and is currently pursuing her Certified Wine Specialist Award (CSW).