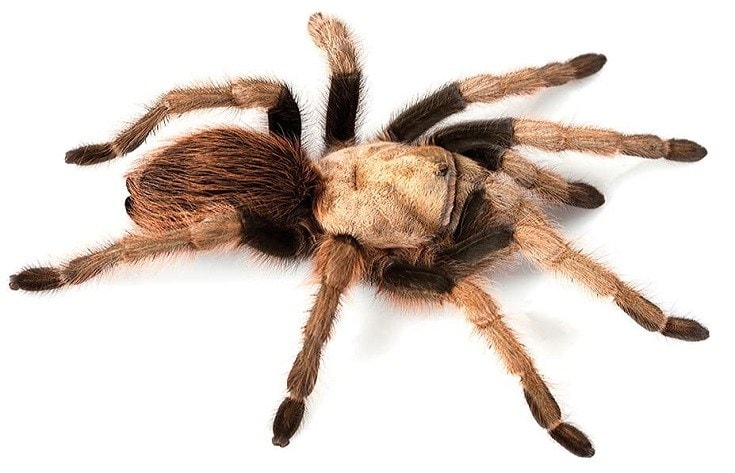 While spiders may send many people running off in fear, spiders — Tarantulas, in particular — make great pets. Tarantulas are generally docile spiders that live in burrows in the ground and hunt their prey rather than wait for something to fly into their web. This makes them relatively simple to care for as pets, as they are easy to feed and don’t take up a ton of space.

There are around 30 species of Tarantula species native to the United States, and over 800 species are documented worldwide. Tarantulas, or Theraphosidae, are typically large, hairy spiders that can have leg-spans up to 11 inches. While they may look terrifying to some, they are relatively harmless to humans — their venom is typically weaker than a bee’s and will give you nothing more than a painful bite. This has made them popular pets worldwide and by far the most popular spider species to keep as pets.

While there are hundreds of different species of Tarantula, only a handful of them make good pets. Of those, many are suited only to experienced owners. If you have decided that a Tarantula should be your next pet, check out this list of the best beginner Tarantula species that make great pets for arachnid enthusiasts!

Also known as the Martinique Red Tree Spider, the Antilles Pink Toe is a popular Tarantula pet due to its docile nature and unique coloration. These tree-dwelling arachnids are primarily black with unique pink-orange coloring at the end of their legs and reach about 5 inches in length. Males are typically more brightly colored than females and live an average of 5 years old, whereas females can live up to 10 years.

Known for its jet-black body and velvety appearance, the Brazilian Black is often referred to as the “Black Lab” of Tarantulas due to its docile nature. It is one of the most popular pet Tarantulas due to having a long lifespan and gentle temperament, and they will typically flee rather than attack. This popularity also makes them one of the most expensive species, and they can take up to 8 years to fully mature.

The Brazilian Pink Bird-Eating Tarantula is the third-largest Tarantula in the world, with a leg-span of up to 11 inches. They are a popular species due to their readiness to breed, their large size, and their docile nature. Large species of Tarantula can be difficult to look after, but the Brazilian Pink is an exception and adults are typically calm and gentle. While they are not hugely venomous, due to their large size, a bite could result in some serious mechanical damage.

The Brazilian Red and White is a fairly large species of Tarantula, famous for its white striped legs and red hairs. These spiders have become a popular pet due to their unique coloration and large size but can be skittish in nature with defensive urticating hairs, making them not amenable to too much handling and better suited to owners with some experience. They typically live for 13-15 years.

A common and popular Tarantula pet, the Brazilian Whiteknee is primarily black with distinctive white bands on its legs. The males have less distinctive coloring and are generally smaller, reaching up to 3.5 inches in length, while females can have leg-spans of up to 8.5 inches. They are a fast-growing species, reaching full maturity at around 4 years old. Their venom is not that harmful, but due to their large size, their bite could cause serious mechanical damage.

The Chaco Golden Knee is a large species of Tarantula and can reach up to 8 inches in leg-span. They are popular pets due to their large size and unique bands of gold stripes on their legs. They are calm and docile spiders that make ideal pets for beginners, and females can live for over 20 years, while males typically live only for 5-6 years.

The Chilean Rose is a popular choice of pet tarantula due to its striking coloration and docile nature, and they are one of the most available species in the United States. Females are known to live over 20 years in captivity, but due to the limited time that they have been available as pets, this number could be far longer. They are inexpensive, widely available, and low-maintenance pets, all of which make them an ideal choice for beginner arachnid enthusiasts.

Also known as the Striped-kneed Tarantula, the Costa Rica Zebra is typically black with stripes covering the legs at the joints. Females can live up to 20 years and reach 4.5 inches in leg-span. While these spiders are fairly easy to care for, they can be skittish at times, and they are extremely fast-moving, making them a less-than-ideal species for owners who want to handle their spiders. They are easily startled and difficult to catch, so they should not be handled unless absolutely necessary.

The large-bodied Desert Blonde is a popular choice of a pet due to its long lifespan of up to 30 years for females, and docile nature. They are easy to care for but should not be handled often, as they are slightly more aggressive than other beginner species. Most of these spiders are caught in the wild and not bred in captivity, as the males breed only once in their lifetime.

The Greenbottle Blue is a great beginner pet as it is easy to care for but is a fairly skittish and nervous species that shouldn’t be handled often. They are beautiful spiders with metallic blue legs and blue-green bodies and have an average leg-span of up to 6 inches. They are active and fast-growing spiders that can live for up to 20 years.

The Honduran Curly Hair spider has a round body covered with long bristles that curl slightly, giving it its name. The hairs are mostly brown and black, but some have a golden color, giving the Curly Hair an overall bronze sheen. They are generally calm and docile spiders that make great pets, and females can live up to 10 years in captivity. They are easily frightened and should not be handled regularly.

The Mexican Red Knee gets its name from its characteristically red legs with black tips that make it a popular pet for arachnid enthusiasts. They are well known as one of the calmest and docile Tarantulas around and thus are great spiders for beginners. Females can live for 20-30 years in some cases, so owning one of these spiders is a long-term investment.

The Mexican Redleg is closely related to the famous Mexican Red Knee and is a popular pet for beginner and experienced arachnid enthusiasts. They are slow to mature, and females can live up to 30 years old. They are docile and calm, which along with their striking coloration and large size, makes them a highly popular pet, so much so that they are considered a threatened species due to their being captured for sale.

The Pink Zebra Beauty is a slow-moving, docile, tolerant, and comparatively small species of tarantula, making it a popular choice of pet for beginners. They are primarily dark brown with yellow stripes on their legs and reach up to 6 inches in leg-span. Females can live for up to 25 years, while males typically live for only around 10 years.

While Tarantulas make unique and interesting pets, a few species are on the verge of extinction due to capture for the pet industry. If you are looking to get into the world of arachnids as pets, we recommend purchasing spiders only bred in captivity to ensure the survival of these beautiful creatures. The pet trade may cause the extinction of several breeds of Tarantulas in the wild, and so purchasing wild-caught species will only serve to fuel this industry.

Lastly, some species of Tarantula can live for well over 20 years, so purchasing a Tarantula is not something that should be taken lightly, as they are a long-term investment.